Open Broadcaster Software or OBS is a versatile tool and can be used to capture your screen and/or PowerPoint presentation and record it for use as an on-demand video or even streaming it live to the audience. It supports multiple source types to capture while dynamically mixing in the prerecorded video, talking heads, audio, graphics, window captures, browser windows, and webcams. OBS also allows you to generate transitions and other video effects for added polish and then sends the encoded video to VIDIMZO for distribution. Being an open source tool, OBS is freely available for all to use under the GNU General Public License v2.0 (or greater) on all major platforms including PC, Mac and Linux.

This article will cover the steps required to setup OBS Studio to record videos from Powerpoint presentations and upload them to VIDIZMO.

To learn more about OBS, click on the links below:

2. Once installed, launch the Open Broadcaster Software and you will get the following OBS Studio interface. 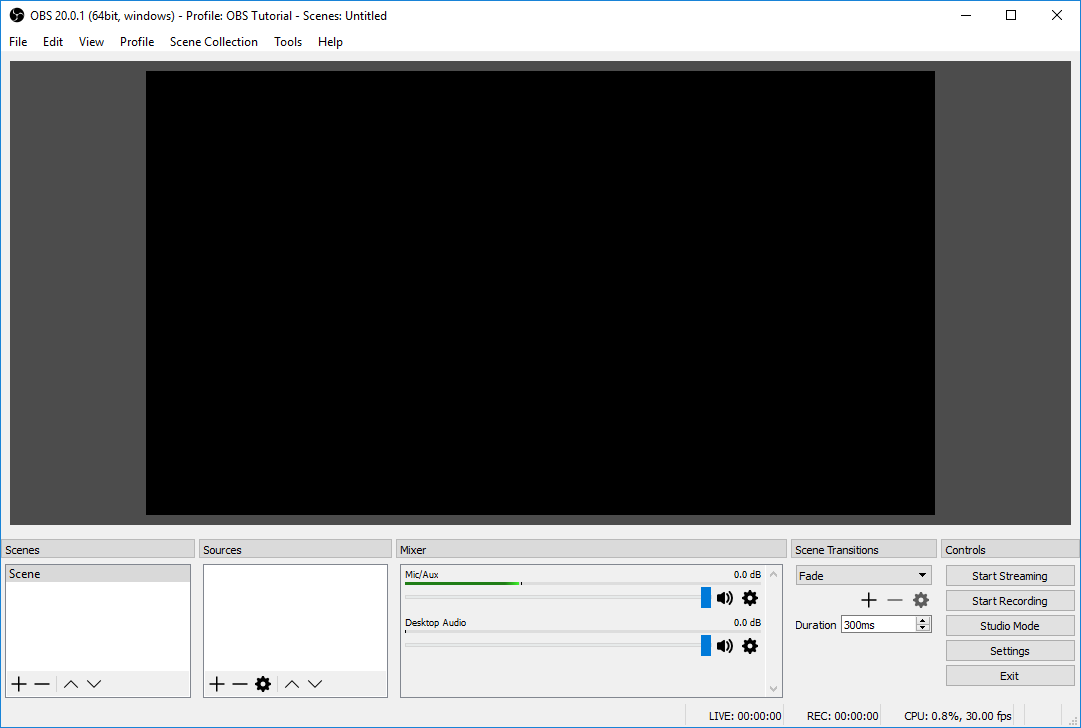 3. On the OBS main interface, the first thing you need to do is to switch to "Studio Mode". The Preview window shows the selected source while the Live window shows actual output. This will help you to manage your recording by showing what you want and when you want.

Each time you want to load the scene from Preview to Live, use the "Transition" button. 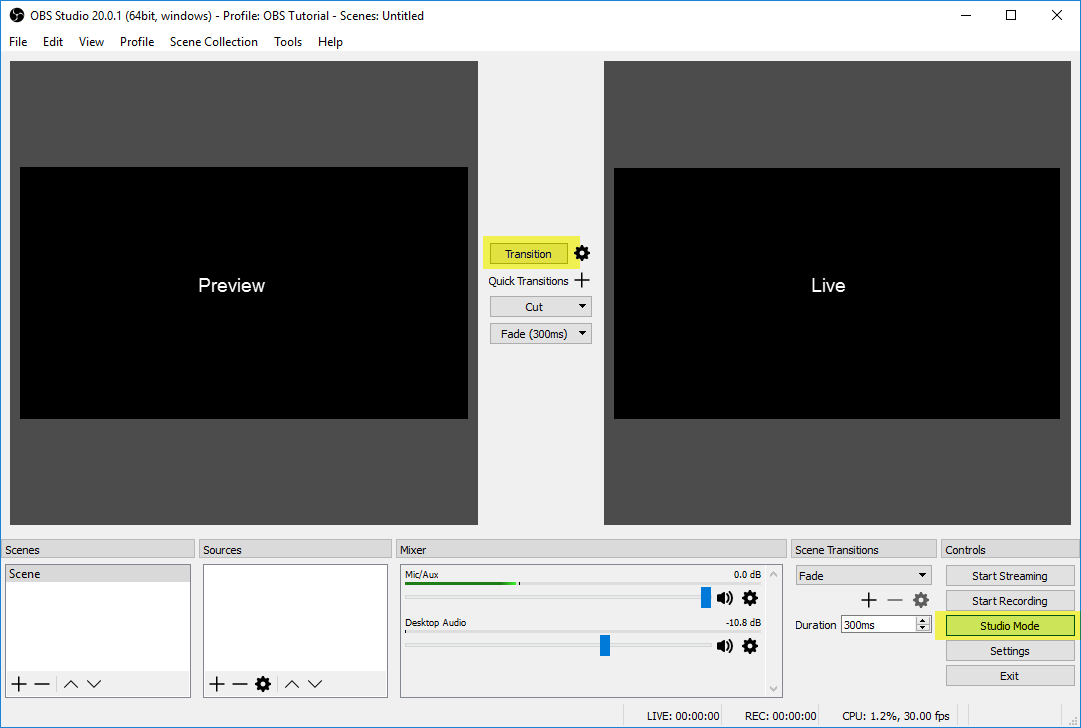 4. Following are the controls at the bottom of the preview and live windows:

- Scenes: Here you can set up an unlimited number of scenes you can switch between seamlessly via custom transitions. This is helpful when you want to switch between two sources from different scenes. For example, pause your PowerPoint presentation and load a video already set up in another scene. Then, when the video ends or is paused, you can transition back to the PowerPoint and continue your presentation.

- Mixer: This is an intuitive audio mixer with per-source filters such as noise gate, noise suppression, and gain.

5. Adding a Source for your Stream

i. Click on the "+" icon or right-click inside the Sources window to bring up the Sources.
ii. In our example, we will select "Window Capture" so that we can point it to our PowerPoint presentation. 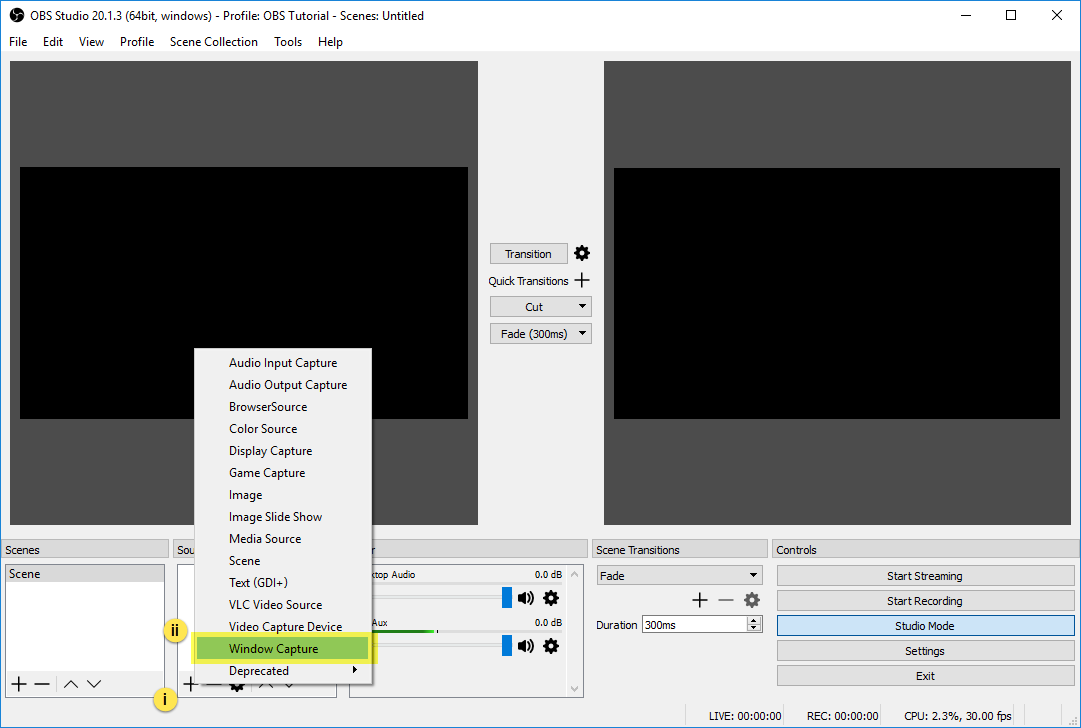 6. Clicking on the "Window Capture" brings up another window which allows you to create a source since we just started the project for the first time. If you had created a source before, it will be listed in the window here to select from.

Click on the "OK" button to proceed to select your display for OBS to capture. 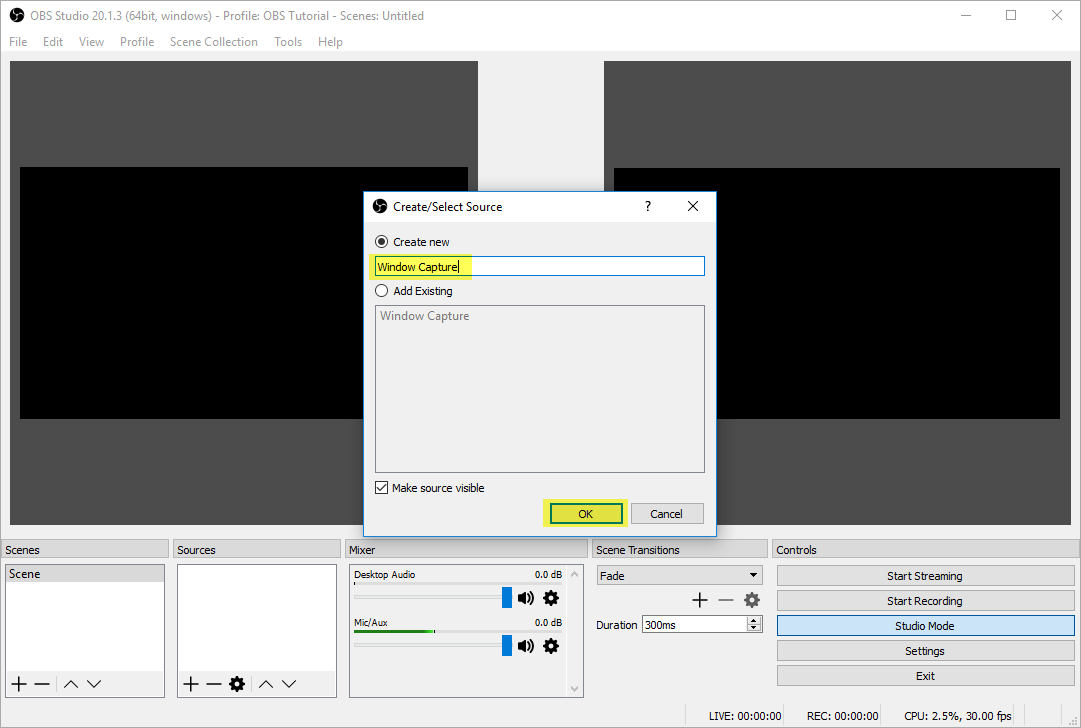 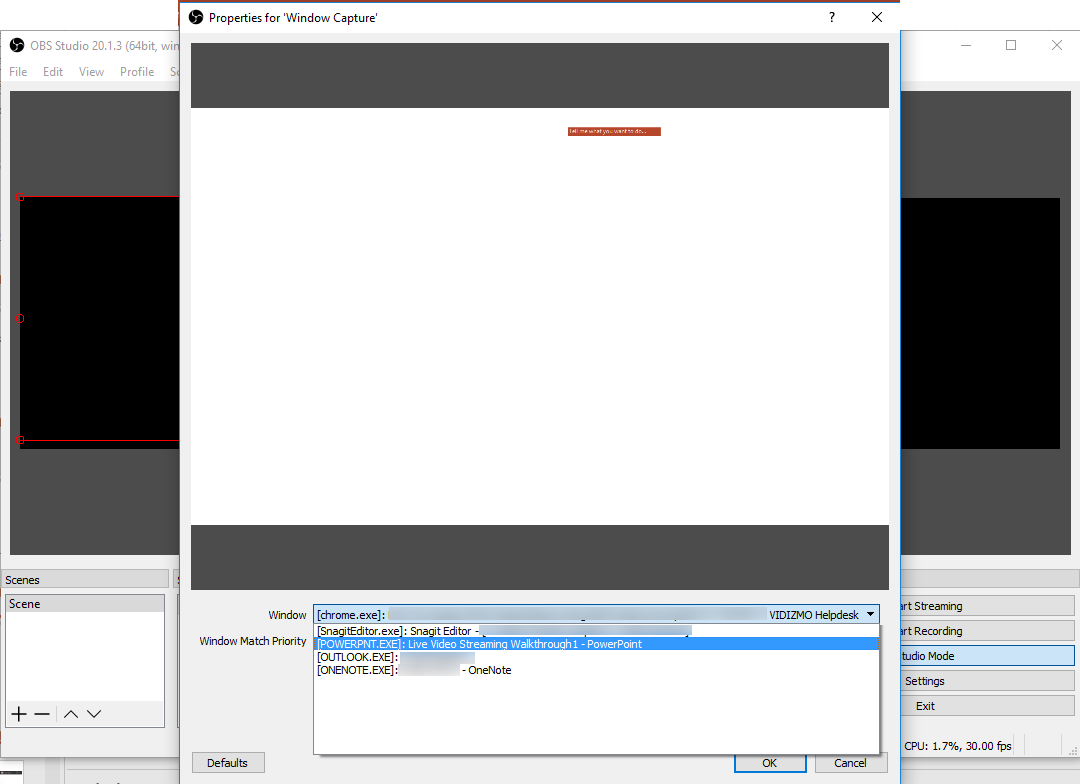 7. With the desired window selected, OBS Studio should display the PowerPoint capture in the preview pane (left-hand side).

8. When you select the primary display, OBS Studio shows an infinite loop of a window within a window, which is normal for OBS Studio. Select your second display from the drop-down to resolve this. 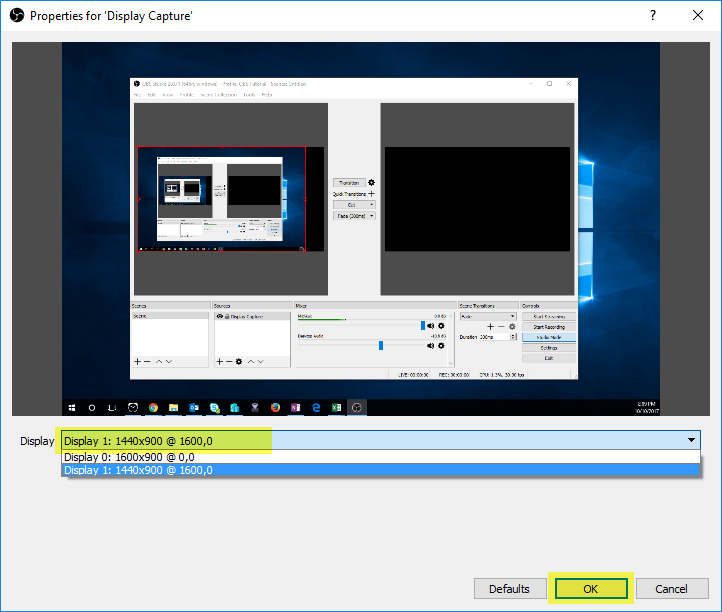 The red outline indicates captured area. You can right-click in the area and use Ctr+F key to make the capture area completely fit into the window. You can also drag the anchor points to resize the capture area. This is particularly helpful if you want to hide a particular portion of the screen. For example, drag it to omit the toolbar and icons appearing at the bottom of your display. 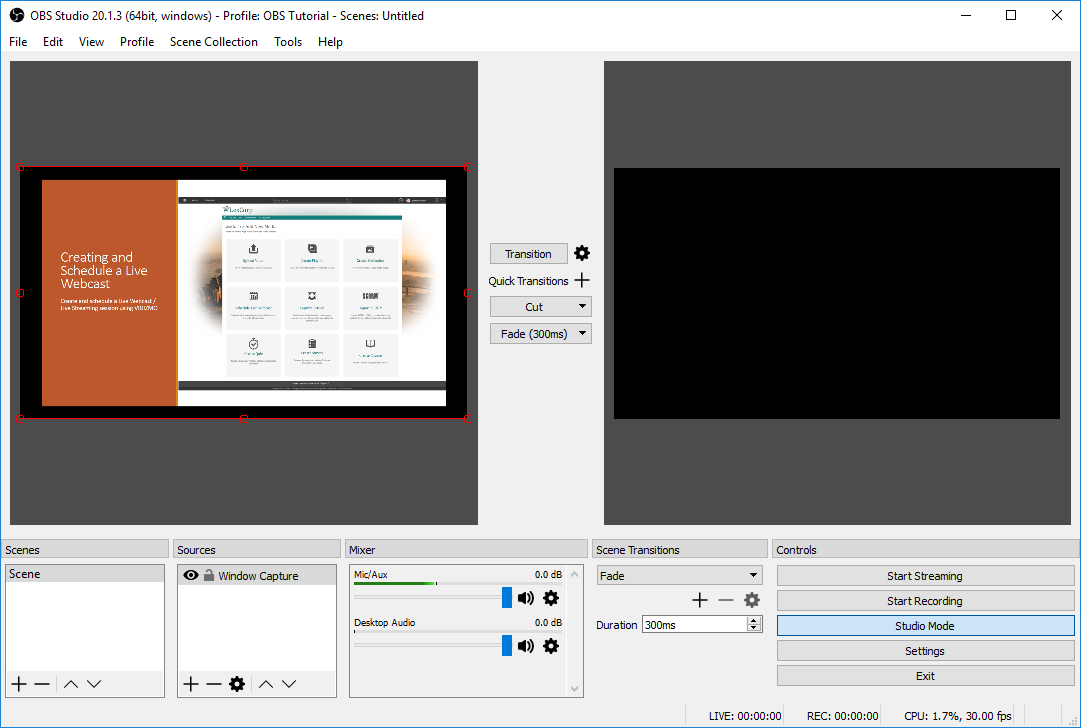 9. Load the presentation so you can preview how it appears. Then using the "transition" button, move it to the window on the right.

It is important to note that anything that appears on the right (Live) window is what the viewers will see. 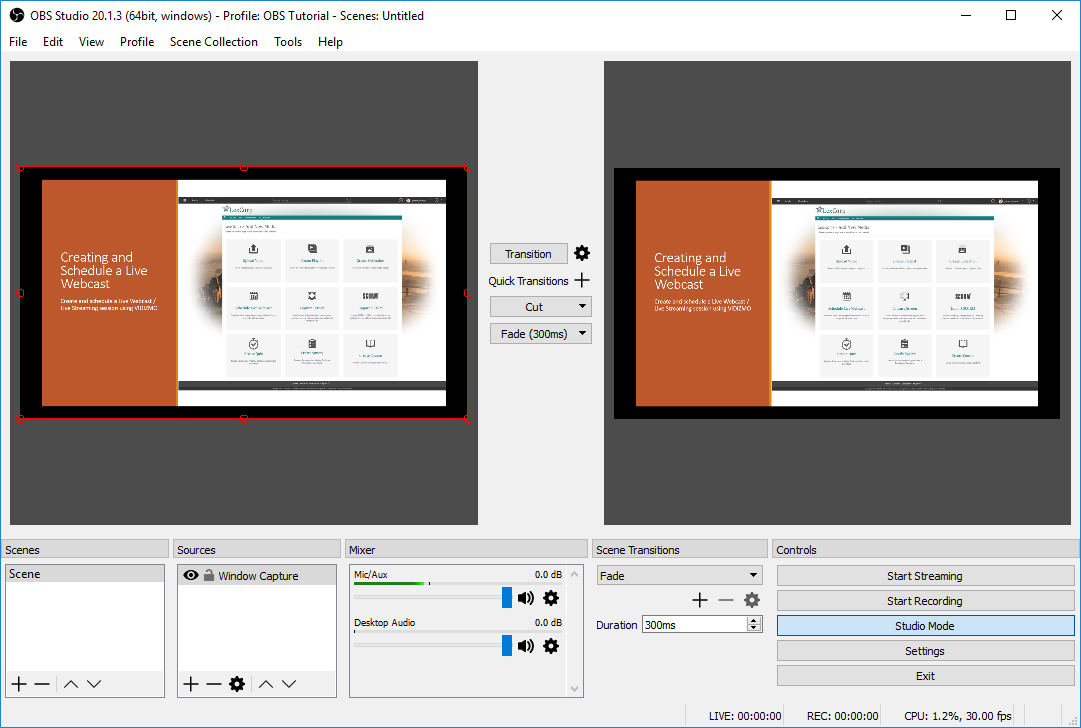 Once you are satisfied with the output in the live window, click on the "Start Recording" button to begin your recording. The button changes to "Stop Recording" to indicate OBS is ready to stop the recording. Towards the bottom, the recording timer lets you know how much time has elapsed since the recording started. 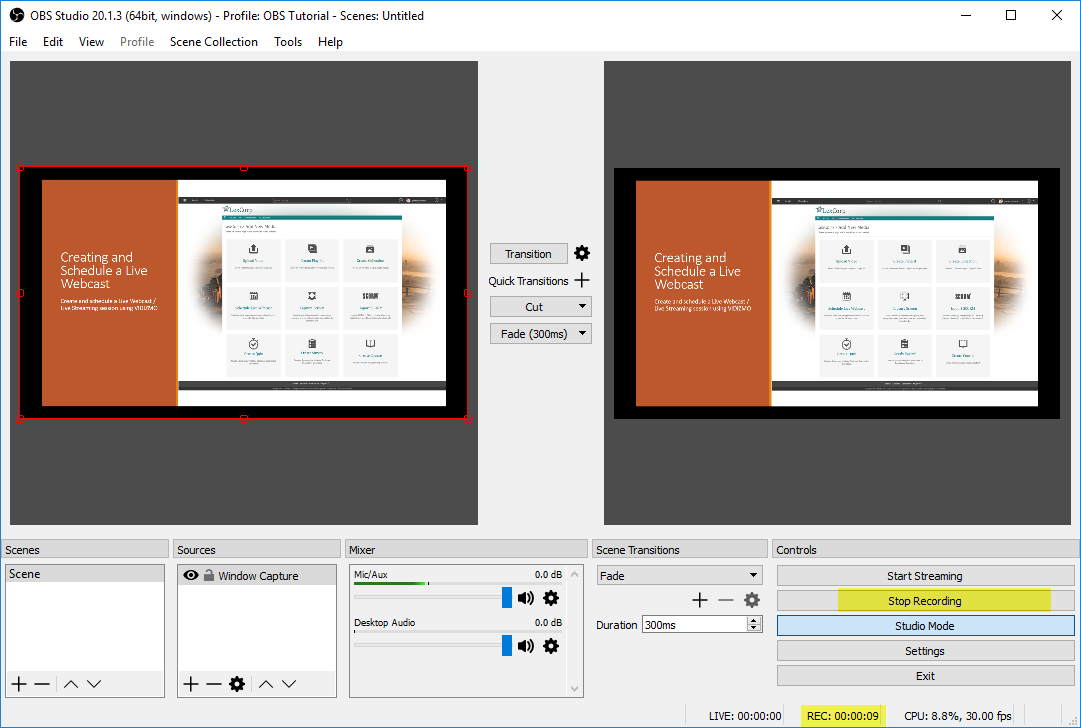 i. Clicking on the Settings button on the main interface

ii. Select Output from the navigation on the left-hand side

It is important to note that OBS does not continue on the same recording once a recording is stopped i.e. you cannot pause a recording. A new file is generated when the next time "Start Recording" button is pressed. 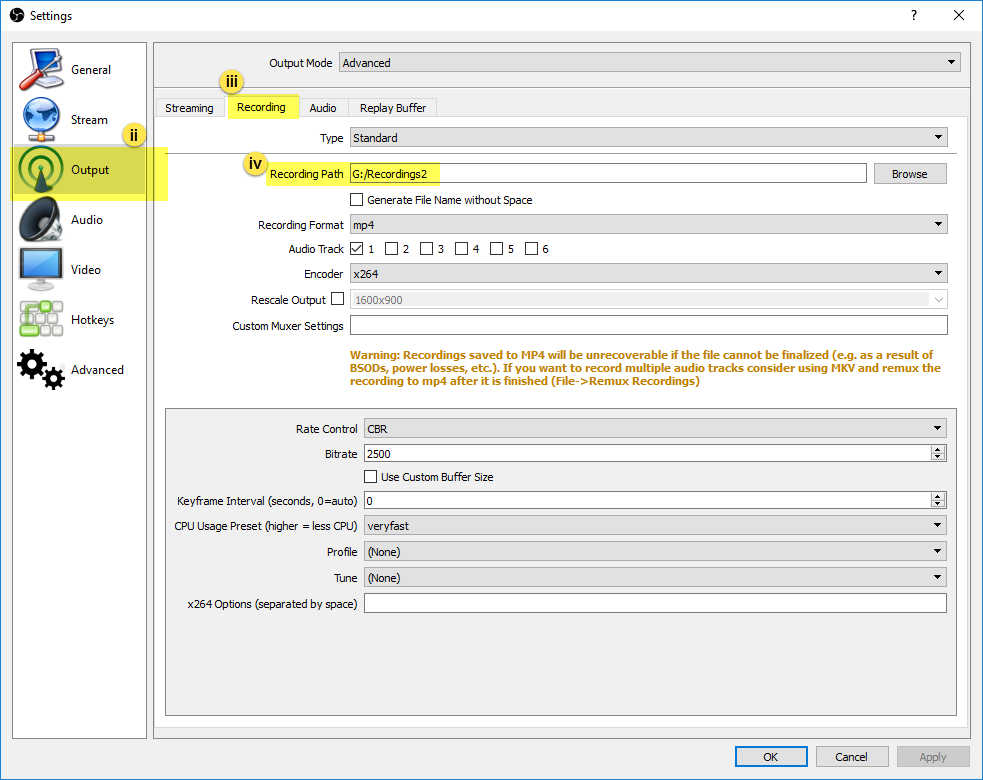 To learn more about how OBS Studio can be used, click on the following links:

- Adding a Talking Head To Your Videos in OBS